A History of Contempt for Eurobodalla Ratepayers

In late 2009 Eurobodalla Council staff contracted SMEC to perform a Scoping Study for the Eurobodalla coastline including hazard mapping. This was in response to a 250 metre section of  Batemans Bay shoreline being declared an “erosion hotspot”. What is interesting with this is that:

In early 2010 Council staff commenced work on its home-grown Sea Level Rise Adaptation Policy; a policy like no other anywhere in NSW. It seems that the CSIRO and the Department of Environment bureaucrats coached Council staff.

The draft SMEC Scoping Study was concluded in mid-2010 – the mapping is dated June 2010.

In early 2010 Council staff conducted Claytons Information sessions on sea level rise and slipped their home-grown policy into those sessions. Shire-wide it is estimated that less than 100 people attended those sessions because they were badly promoted and purposefully so.

In July 2010: Council staff presented their unique Sea Level Rise Adaptation Policy to Council for endorsement. It swept up over 6,000 properties under a 5m AHD “Investigation Zone”. To put this into perspective, the roadway of the Batemans Bay Bridge is well below 5m AHD as is every commercial premise in Batemans Bay CBD.

Council was not informed of any alternatives and was not informed of the $50,000 SMEC consultancy that showed nowhere near 6,000 properties to be at risk. It was not until December 2010 that Council staff owned up to the SMEC Study – which has never been used.

Council’s 2010 Policy is a retreat policy except for the two most vulnerable locations in the Shire – Batemans Bay CBD and Narooma Flats. Ratepayers were told that they would have to pay to defend those two locations but were not allowed to defend their own and could be forced out of their homes with no compensation.

The Mayor owns property at one of those protected locations. This was not considered a “vested financial interest” by the General Manager or the Mayor or their friends in high places in the Department of Local Government..

The S149(2) certificates of those 6,000 plus properties were annotated “this land has been identified as being affected by projected sea level rise”. That was a lie.

The policy forced owners of those properties to engage a Coastal Engineer to do a coastal hazard report should a DA be lodged for even the most minor of works including a pergola or converting a garage to a rumpus room. If there was “no risk” the DA was approved. However, even if the Coastal Engineer identified no risk the S149 annotation was not removed.

No property owner (of those 6,000+ properties) has ever been informed of the Policy or of any change made to their S149 Certificates. One reason given by a Councillor was that “he didn’t want to spook the herd”.

There have been several failed attempts to repeal the Council Policy and/or inform affected ratepayers of the policy.

In comparison to the Bega and Shoalhaven, close to $1billion dollars has been wiped off residential property values in the Eurobodalla since the Council Policy was endorsed. The property sales graph below says it all. The downturn started as the Policy started to be felt.

In July 2013 Council endorsed a staff strategy to seek a joint consultancy in cooperation with the neighbouring Shires of Bega and Shoalhaven to seek localised planning benchmarks – a worthwhile venture one would think.

Bega Shire declined to be part of it.

Shoalhaven agreed and $80,000 was allocated with OE&H going halves.

Council staff prepared a Technical Brief that was little more that a “join the dots” exercise in promoting the IPCC and CSIRO predictions.

The successful quote was from Whitehead and Associates (David Wainwright) and Coastal Environment (Doug Lord).

The draft and final report titled “South Coast Regional Sea-Level Rise Planning and Policy Response Framework” went well beyond what the Council had thought they had endorsed. It recommended retreat, 100 year planning window, the highest possible SLR projection from IPCC AR5 RCP8.5, and reviewed every 7 years in latest IPCC Reports. Government policies of retreat as a last option or to use localised evidence based data was ignored.

The public exhibition received about 100 submissions – most from the Eurobodalla and mostly rejecting the Report.

The Mayor of the Eurobodalla wrote to the other 53 Coastal Councils seeking them to join in and support “his” initiative. Only one of those 53 Councils thought it was a good idea.

The Shoalhaven City Council (on 28 October 2014) rejected the staff recommendation to accept the policy and came up with its own set of rules being: IPCC AR5 RCP6.0 SLR projections using benchmark of 23cm in a planning window to 2050 reviewed every 7 years using evidence from tidal gauges or new generation satellite altimetry. 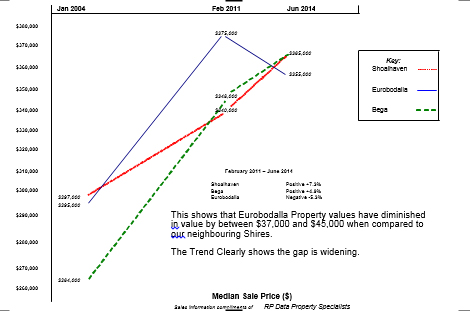 The Eurobodalla Council voted on 25 November to endorse the “South Coast Regional Sea-Level Rise Planning and Policy Response Framework” as well as setting benchmarks for 50 to 100 years using the high end AR5 RCP6.0. The resolution gave Council staff a licence to set planning benchmarks of whatever they wanted for undefined planning windows.

On 10 February 2015 Eurobodalla Council endorsed a CZMP for a small estuary south of Batemans Bay using the high end of IPCC AR5 RCP8.5 because Council had endorsed that action by previously endorsing the “South Coast Regional Sea-Level Rise Planning and Policy Response Framework”. The Councillors were told about this but blindly followed directions from the staff.

On the same day the Shoalhaven refined their policy and set a 2100 planning window benchmark of just 36cm. Once again they rejected the staff recommendations to endorse the “South Coast Regional Sea-Level Rise Planning and Policy Response Framework”.

What started out in July 2013 to be a Regional initiative is in tatters. The Eurobodalla Shire is a rogue Council and there is a move to squeeze it out through amalgamations with adjoining Shires. For many, this cannot happen quickly enough.

One Response so far.